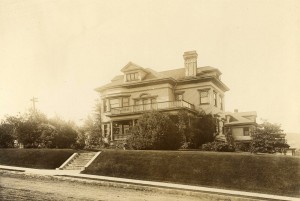 Greg has spent a lot of time gathering pictures of the Captain George Conrad Flavel Home. This picture, from about 1915 we think, is courtesy of the Clatsop County Historical Society.

It’s interesting to see that the trim is a different color than the body of the house.  You can see the Rosebriar, the former nunnery for St. Mary’s church, in the background.  And eagle eyed viewers will notice that a window is missing.  Somewhere along the way, the house was remodeled to add a bathroom to the master boudoir.  A window was added to the bathroom, on the second floor. 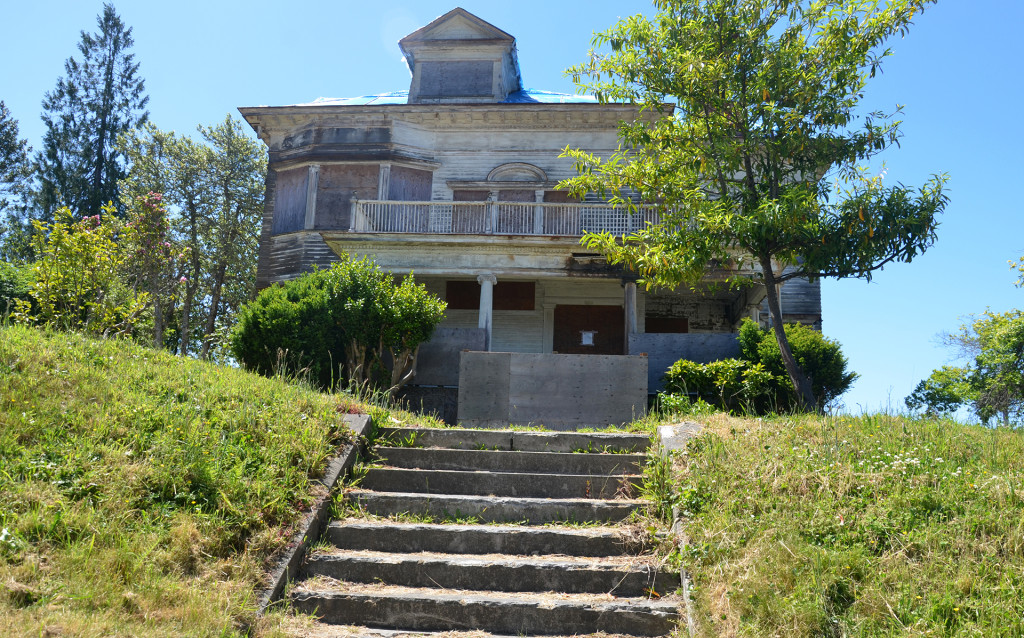 The Flavel home, a historic but neglected relic of Astoria, finally has a new owner.

Greg Newenhof, who with his brother, Jeff, owns City Lumber Company, has agreed to pay $221,901 in cash for the long vacant mansion at 15th Street and Franklin Avenue.

“I plan to fix it up and move into the house,” Greg Newenhof said Thursday evening.

Newenhof, who lives two blocks away on 17th Street and frequently walks and drives by the Flavel home, said he helped a conservator work on the property when she was preparing for the sale.

“I’ve always just enjoyed that look to the house and thought, ‘Wow, neat house,’” he said.

Asked how long it might take him to restore the old home, which was purchased “as is,” Newenhof chuckled. “Probably the rest of my life,” he said.

A conservator for the elderly Mary Louise Flavel — the granddaughter of Capt. George Conrad Flavel — had agreed in December to sell the family home to help end a contentious saga with the city over code violations.

But the deteriorating property has been considered a blight on a city that prides itself on historic preservation and where, several blocks to the west, the magnificently preserved Flavel House Museum is a popular tourist draw.

The museum was the Queen Anne-style home of Capt. George Flavel, the legendary Columbia River bar pilot. The home on 15th Street was built for Flavel’s son, George Conrad Flavel, who was also a captain.

The two Flavel homes reflect both the aspiration and the challenge of preserving Astoria’s past.

The sale agreement, according to documents prepared for Washington County Circuit Court, authorizes Mary Louise Flavel’s conservator to use sale proceeds to cover unpaid and delinquent taxes on the home and pay the city $20,000 toward resolving judgments against Flavel.

The conservator, Caroline Evans of Portland, is also authorized to pay property taxes for two Flavel properties on Commercial Street.

In December, the Astoria City Council approved an agreement with Evans on the sale of the home and the Flavel properties on Commercial Street, the heart of the downtown business corridor.

The city agreed to forgo collecting the full amount of liens against Flavel, while the conservator pledged to pay the city $40,000 — $20,000 after the sale of the home and $10,000 after each commercial property is sold.

“Having owned the lumber store, they would be the perfect people to buy the house as far as I’m concerned,” Blair Henningsgaard, the Astoria city attorney, said of Newenhof.

The city credited a derelict building ordinance adopted in 2011 for providing the tools needed to corner negligent property owners.

The city obtained an abatement warrant for the Flavel home in 2012 and essentially took control of the ramshackle property. But Mary Louise Flavel herself had eluded city officials for years. “I don’t want Astoria to know where I am,” she told a reporter for The Daily Astorian who spdoke with her at her Portland-area home in 2012.